Here’s a screen shot of the pop-up battle sequence. Right not I just have the map fade to black, and the battle background appears. I still need to create the artwork for the attack and defend sequences for the guards, hero, and imps.

Also, my idea for the right column is to show a min-map and info on current character. Kind of like how you could access that in Shining Force, but in this case it’s always visible.

Here are some sketches of some of the first things to appear in the game. The background will be used in the first battle of the game which will be between the hero with a couple of gaurds, verus a few imps. The gaurd and imp are also show in the sketches. 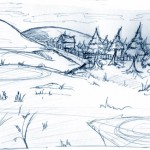 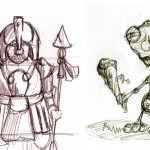 Here’s one more image showing the two gaurds that are part of the three man team you control in the first battle. Not pictured is the hero. 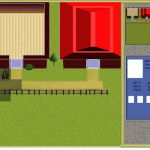 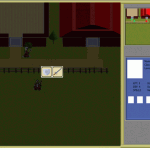 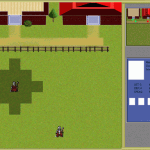 Seriously though, I kept working on Spark, but it wasn’t going where I wanted it to. So I scrapped it and started over. This time using actionscript. I’m much happier with how it is progressing now and I’m planning to have a playable game out by the end of this year. Maybe a few more game updates as well.