The Shining Source first came online on August 10th, 2000. The site was born when “The Shiny Sword” was being developed, and was a place for Shining Force fangame developers to meet and talk about their projects. Since those early days it has grown into a home for many different projects, Shining style and otherwise.

The Hall of Shame

You may remember this design if you’re a Shining Source veteran. Hosted by the now defunct “acmefiles”, the site was home to many of the earliest Shining Force fan projects, including “The Shiny Sword”, “Lucidus Manus” and “Shining Star” 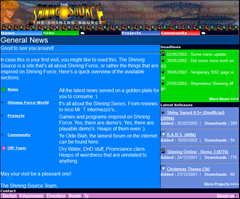 A new look was launched in mid 2002. As you can see, it was a little more colourful. It also brought about some new features, such as a more robust news system and a better download management.

The site grew a lot during these years, and new projects, demo’s and articles were added over time. 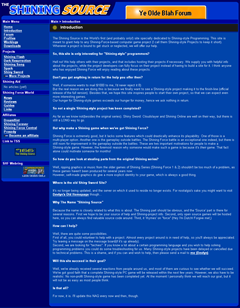 On April 18th, 2004, version 4.0 of the site was released. Gone were the bright colours of 3.0, to be replaced with classier blue and orange tones.

This was the first attempt at a proper CMS for tSS. Projects had their own sections, with screenshots and downloads controlled by developers instead of admins.

Which brings us to the current version of tSS, released on December 28th, 2006.

It may not be quite as lively as it was in the early days, but it’s still the best place if you’re looking for Shining Force fangames, or if you want help making your own.

Here’s to another 10 years!